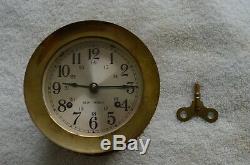 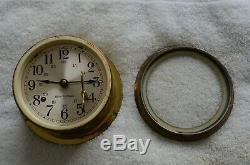 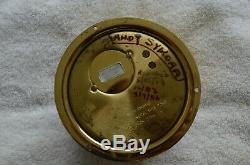 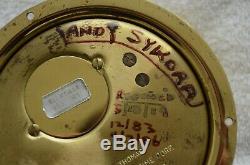 This is a working ships clock, salvaged from a Great Lakes ore freighter, that is part of the collection of Dennis Hale, the man who was the lone survivor of the wreck of the DANIEL J. MORRELL in Lake Huron on November 29, 1966. It comes with an interesting story! The clock is made by Seth Thomas Company and is a pilothouse clock, model E537-001 Helmsman, circa 1935. One day later, June 7, 2020, all of the men from the MORRELL will be inducted posthumously into the Great Lakes Lore Museum's Sailors Hall of Fame.

Fame in Rogers City, MI. Dennis was rescued from a wooden liferaft after 36 hours, surrounded by three dead shipmates. Amazingly, he survived wearing nothing but his underwear, a lifejacket, and his Navy peacoat.

Had it not been for a man from Bethlehem Steel named Andy Sykora, Dennis may not have survived! Andy was one of the dispatchers for Bethlehem. He suspected that something bad had taken place and wanted to send out an APB to the Coast Guard much sooner, but his supervisors at Bethlehem said no, for reasons which will be discussed in a new book, The DANIEL J.

MORRELL-Lost, But No Longer Forgotten, that will be released on June 6. At about noon on December 30th, 1966, Andy took a call in which he heard that the G. POST had found wreckage and bodies. It was at this time the Coast Guard was finally called.

Ironically, it was Andy, who while on the shakedown cruise for the new tug FRANCIS A. SMALL, took one of the two last known pictures of the MORRELL, on November 25, 1966. Fast forward about 30 years.

Dennis Hale had begun speaking publicly about his ordeal on the MORRELL and giving speeches throughout the Great Lakes region. Andy Sykora happened to be at one of these events and introduced himself to one of Dennis's friends, who introduced Andy to Dennis, with the words, This is the man who saved your life. Though stunned initially, Dennis and Andy became friends for the rest of their lives, with Dennis passing in September of 2015 and Andy passing almost exactly a year later.

As many of us learned, Andy took it to his grave that he wished he could have done more, sooner, for the men of the MORRELL. But that story will be told in depth in the new book! Prior to his stint with Bethlehem, he also worked for Oglebay Norton. We have determined this is a clock salvaged from one of the Kinsman ships. Andy put his name on the back, and several dates, including 12/83 and 4/7/86, as well as a date it was repaired, which looks like 5/18/78. The clock WORKS and comes with the key. It is brass and the full front face unscrews so one can insert the key. This is a chance for you to own a piece of Great Lakes History from the Dennis Hale collection.

The item "DANIEL J MORRELL/Dennis Hale Artifact-Brass Seth Thomas 1935 Pilothouse Clock" is in sale since Wednesday, February 12, 2020. This item is in the category "Antiques\Maritime\Maritime Clocks". The seller is "cyclehooptrain" and is located in Green Bay, Wisconsin.