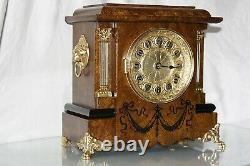 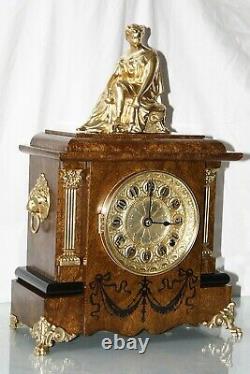 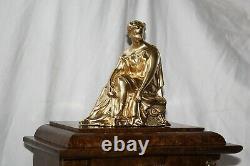 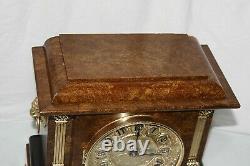 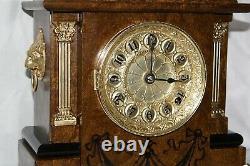 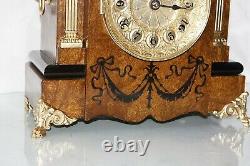 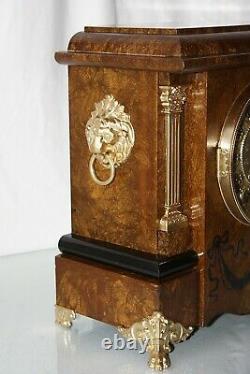 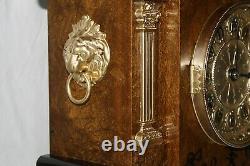 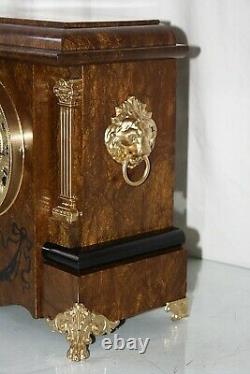 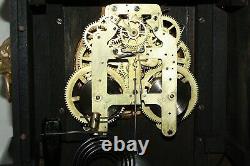 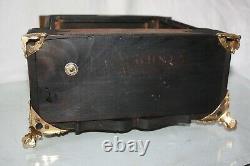 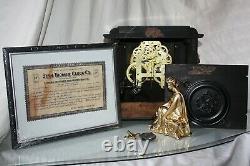 Seth Thomas Clock, ARNO Model c/1896 Batterscoch Adamantine Brown&Gold marble finish trims and top. The clock is with one Corinthian columns ornaments on each side.

Every piece of this clock is original. Clock has also original metal legs and Ornaments just like was for sell in XIX century from the stores by ST. All clock is very unique hardly to find for sale, usually is keep it by collectioners of Seth Thomas clocks. Please see all clock is use zoom , there is no missing adamantine , this particular clock is in Excellent condition. I will include a copy of ST "Guarantee Certificate"(see picture) This particular clock is just token of it's beauty and originality in past. People love to see something old, which comes with the style and elegance of the beginning 20th century, AMAZING. Please feel free to contact me with any questions or to request further photos! Pendulum and key are included with the clock. The clock is running perfect!!!!!!! Clock has original admantine surface, nothing is painted or re-coated, just some touch up was done. Clock is original was polished and clean from dirt to original finish. If any questions just make a message and find even more great items on my listings. See my others clocks for sale. Seth Thomas Clock Company History Plymouth Hollow, Connecticut (After 1865) Thomaston, Connecticut Seth Thomas Seth Thomas was born in Wolcott, Connecticut in 1785, the fifth of seven children of Scottish immigrant, James Thomas, a cooper, and his wife Maria Ward. Connecticut, incidentally, was an important and expanding hub in the American clockmaking trade.

At that time, Aaron became President and began to add new products. Huntington and Harvey Platts of Ithaca, New York and added three models to their line that year.

On January 1, 1931, the firm became a subsidiary of General Time Instruments Corporation and soon passed from family control. In 1955, a flood badly damaged the Seth Thomas factory. They phased out movement manufacturing and began importing many movements from Germany. Hermle, in the Black forest of Germany, has made many movements for Seth Thomas clocks.

Please check the pictures as they say much more than words. I dont usually list every little nick or ding; the pictures show a much better description. Please do a level to the clock to keeping and running well. Customer service is very important to me.

The item "SETH THOMAS Mantel Antique Clock c/1896 Totally RESTORED" is in sale since Saturday, November 7, 2020. This item is in the category "Collectibles\Clocks\Antique (Pre-1930)\Shelf, Mantel". The seller is "edwmi_5239" and is located in Chicago, Illinois. This item can be shipped worldwide.