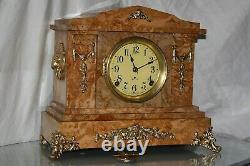 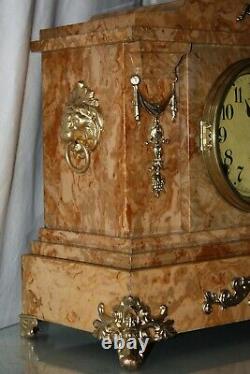 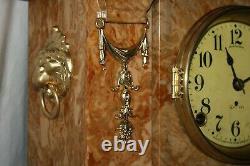 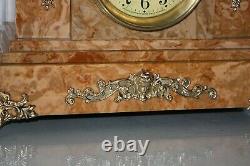 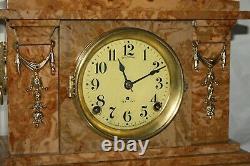 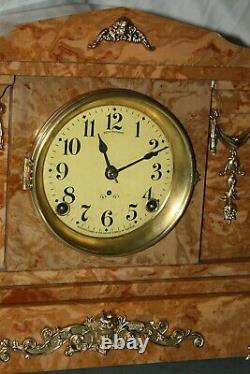 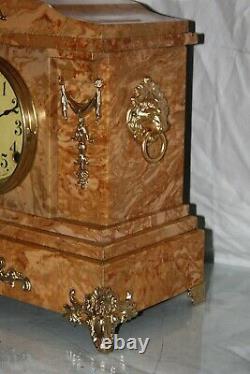 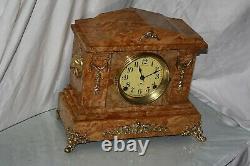 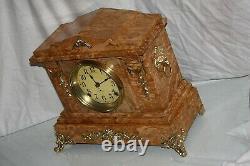 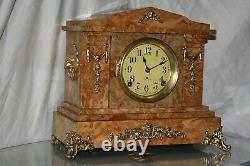 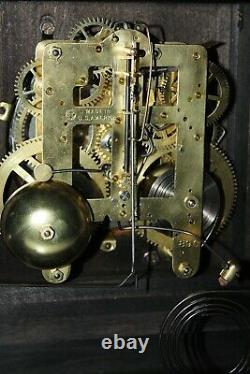 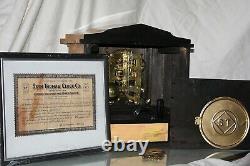 Seth Thomas Adamantine Finish Marble Coffee- Brazilian -Onyx Color. The clock is adamantine Butterscotch, with one Corinthian columns ornaments on each side. Clock chimes the Hours counting them , every half-hour, You also can see on picture how the whole clock is clean after cleaning, including the mechanism. Clock has nice Tick-Tack sound of work.

I will include instruction how to set up the Clock mechanism. Movement is marked with ST-(SETH THOMAS), Clock measures 15 1/2" from leg to leg x 7" deep x 12 3/4 height. BRASS face with , original glass 6 in diameter. Every piece of this clock is original. Clock has also original metal legs and Ornaments just like was for sell in XIX century from the stores by ST.

All clock is very unique hardly to find for sale, usually is keep it by collectioners of Seth Thomas clocks!!! Please see all clock is use zoom , there is no missing adamantine , this particular clock is in Excellent condition.

Clock has original admantine surface, nothing is painted or re-coated, just some touch up was done. Clock is original was polished and clean from dirt to original finish. For over 120 Years old,,,, You can also see the date witch date clock was mas made,,, there is a picture ,,, date is located on the bottom of the clock and You have read beck word--1900 A - JANUARY Letter A is 1St.

If any questions just make a message and find even more great items on my listings,,, thanks. See my others clocks for sale. Seth Thomas Clock Company History Plymouth Hollow, Connecticut (After 1865) Thomaston, Connecticut Seth Thomas Seth Thomas was born in Wolcott, Connecticut in 1785, the fifth of seven children of Scottish immigrant, James Thomas, a cooper, and his wife Maria Ward. Connecticut, incidentally, was an important and expanding hub in the American clockmaking trade. Seth Thomas Childhood Home, 36 Peterson Ln photo above c. 1984 - link to c. 2005 photo He was born in this house and lived there until about 1810. Current Photo Current Map Seth had a natural ability for carpentry and he probably obtained his knowledge and interest in mill property and manufacturing from this. He had imited formal education and left school at an early age to become an apprentice carpenter and joiner to Daniel Tuttle, of Plymouth. Subsequently, he became a skilled woodworker and built houses and barns in the nearby towns around Farmingbury/Wolcott (incorporated 1796). In the early 1800s, Seth attempted to set up a clock-making industry in Wolcott. He made his first clock in his family's house. The woods around the house were filled with mountain laurel trees; many Wolcott men worked cutting the trees and sawing them into thin slices, which, when seasoned, were used for the wooden wheels of the clocks. The women of the town spun flax (cotton) into cords and these were used to hold the clock weights. As a result, the town of Wolcott profited to some extent from the Thomas enterprise, the short time it was located in Wolcott.

A Thomas relative and workman in the factory, received a patent on an improved mechanism. This was put into production and utilized on all later perpetual calendar clocks until the last model was dropped in 1917. Movement Dept - Thomaston CT Regulator clocks were introduced in 1860. Spring driven clocks were introduced ca.

On January 1, 1931, the firm became a subsidiary of General Time Instruments Corporation and soon passed from family control. In 1955, a flood badly damaged the Seth Thomas factory. They phased out movement manufacturing and began importing many movements from Germany. Hermle, in the Black forest of Germany, has made many movements for Seth Thomas clocks. It was reported in 1988 that the firm was all but dissolved. In June 2001 General Time announced that it was closing its entire operation.

I I want all my customers to be satisfied when they receive their package!! The more communication the less misunderstandings. The item "SETH THOMAS Mantel Antique Clock c/1900-January Totally RESTORED -ARNO" is in sale since Saturday, October 10, 2020. This item is in the category "Collectibles\Clocks\Antique (Pre-1930)\Shelf, Mantel". The seller is "edwmi_5239" and is located in Chicago, Illinois.