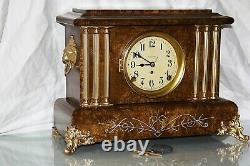 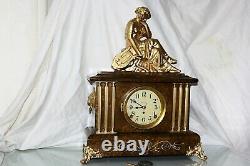 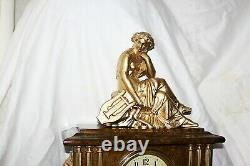 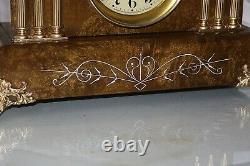 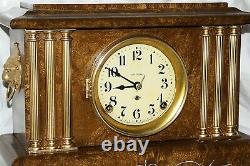 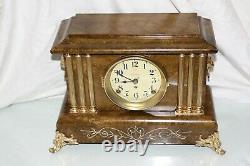 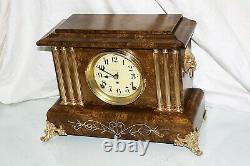 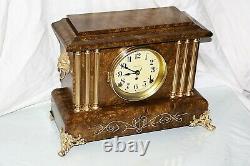 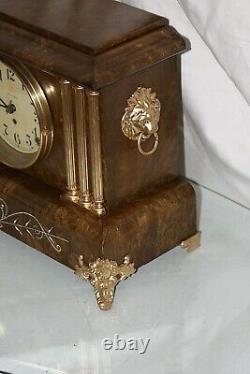 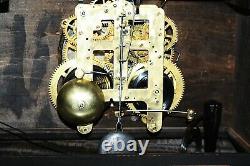 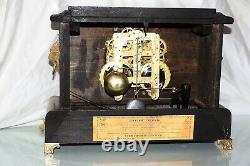 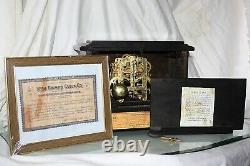 Seth Thomas Adamantine Finish Marble Coffee- Brazilian -Onyx Color. The clock is adamantine Butterscotch, with one Corinthian columns ornaments on each side.

Clock chimes the Hours counting them , every half-hour, You also can see on picture how the whole clock is clean after cleaning, including the mechanism. Clock has nice Tick-Tack sound of work. I will include instruction how to set up the Clock mechanism. Movement is marked with ST-(SETH THOMAS), Clock measures 11" from leg to leg x 7" deep x 11 height. BRASS face with , original glass 6 in diameter.

Every piece of this clock is original. Clock has also original metal legs and Ornaments just like was for sell in XIX century from the stores by ST. All clock is very unique hardly to find for sale, usually is keep it by collectioners of Seth Thomas clocks!!! Please see all clock is use zoom , there is no missing adamantine , this particular clock is in Excellent condition. I will include a copy of ST "Guarantee Certificate"(see picture) This particular clock is just token of it's beauty and originality in past. People love to see something old, which comes with the style and elegance of the beginning 20th century, AMAZING.

Clock has original admantine surface, nothing is painted or re-coated, just some touch up was done. Clock is original was polished and clean from dirt to original finish.

He had imited formal education and left school at an early age to become an apprentice carpenter and joiner to Daniel Tuttle, of Plymouth. Subsequently, he became a skilled woodworker and built houses and barns in the nearby towns around Farmingbury/Wolcott (incorporated 1796). In the early 1800s, Seth attempted to set up a clock-making industry in Wolcott. He made his first clock in his family's house.

They had six children Seth, Martha, Amanda, Edward, Elizabeth, and Aaron. And Aaron went into the clock business with their father, subsequently enlarging the clock factory and developing it into a worldwide business. After Thomas death in 1859, the town of Plymouth CT was renamed "Thomaston" in his honor. At that time, Aaron became President and began to add new products. Huntington and Harvey Platts of Ithaca, New York and added three models to their line that year.

1895; oak kitchen clocks, 1890ca. 1915; tambour clocks, introduced in 1904; chime clocks, introduced in 1909; and electric A/C clocks, introduced in 1928. The Seth Thomas Clock Company was very prosperous into the 20th Century and was considered the Tiffanys of Connecticut clock manufacture, even by their competitors. Between 1865 and 1879 they operated a subsidiary firm known as Seth Thomas' Sons & Company that manufactured a higher-grade 15-day mantel clock movement and during that period were major supporters of a New York sales outlet known as the American Clock Company. Many Seth Thomas clocks from 1881 to 1918 have a date code stamped in ink on the case back or bottom. Usually, the year is done in reverse, followed by a letter AL representing the month. For example, April 1897 would appear as 7981 D. On January 1, 1931, the firm became a subsidiary of General Time Instruments Corporation and soon passed from family control. In 1955, a flood badly damaged the Seth Thomas factory. They phased out movement manufacturing and began importing many movements from Germany. Hermle, in the Black forest of Germany, has made many movements for Seth Thomas clocks. It was reported in 1988 that the firm was all but dissolved.

In June 2001 General Time announced that it was closing its entire operation. The Colibri Group acquired Seth Thomas.

I dont usually list every little nick or ding; the pictures show a much better description. Please do a level to the clock to keeping and running well. Customer service is very important to me. If you have any questions at any point during the purchasing process, please dont hesitate to ask or contact me. Feedback I Strive for 5!!

The item "SETH THOMAS Mantel Antique Clock c/1900-January Totally RESTORED" is in sale since Wednesday, February 17, 2021. This item is in the category "Collectibles\Clocks\Antique (Pre-1930)\Shelf, Mantel". The seller is "edwmi_5239" and is located in Chicago, Illinois. This item can be shipped worldwide.