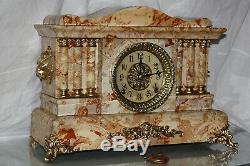 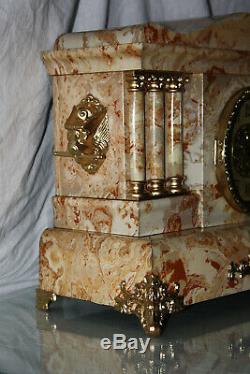 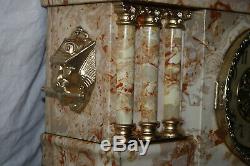 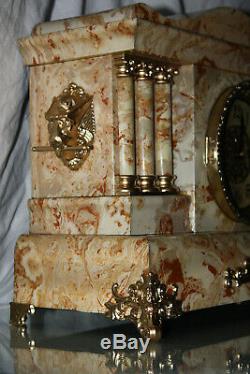 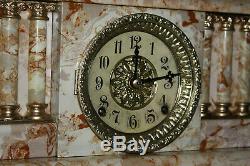 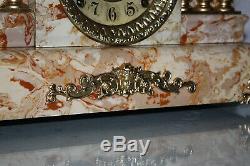 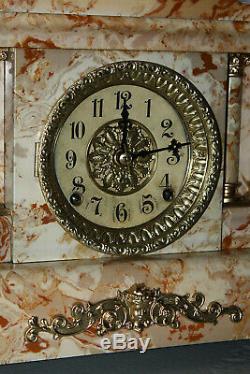 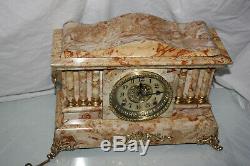 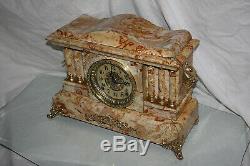 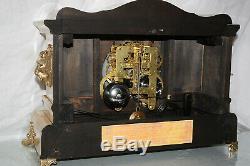 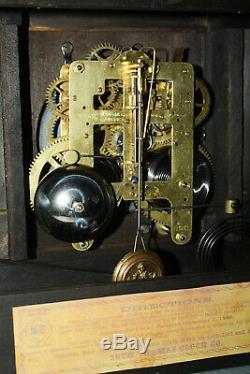 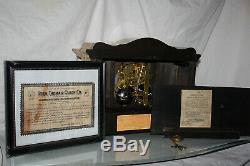 Seth Thomas Clock, Brazilian Onyx Adamantine finish. The clock is adamantine with 3 Corinthian columns on the each side they are All originals colors from ST Factory.

Clock chimes the Hours counting them , every half-hour, You also can see on picture how the whole clock is clean after cleaning, including the mechanism. Clock has nice Tick-Tack sound of work. I will include instruction how to set up the Clock mechanism. Movement is marked with ST-(SETH THOMAS), Clock measures 18" from leg to leg x 7" deep x 12 3/4 height.

Price is height, but You can also make an offer, Please see all clock is use zoom , there , this particular clock is in Excellent condition. I will include a copy of ST "Guarantee Certificate"(see picture) FOR FREE, This particular clock is just token of it's beauty and originality in past. People love to see something old, which comes with the style and elegance of the beginning 20th century, AMAZING. Please feel free to contact me with any questions or to request further photos! Pendulum and key are included with the clock.

If any questions just make a message and find even more great items on my listings. ,,, thanks Seth Thomas Clock Company History Plymouth Hollow, Connecticut (After 1865) Thomaston, Connecticut Seth Thomas Seth Thomas was born in Wolcott, Connecticut in 1785, the fifth of seven children of Scottish immigrant, James Thomas, a cooper, and his wife Maria Ward. Connecticut, incidentally, was an important and expanding hub in the American clockmaking trade.

In 1807, Seth moved to Plymouth. There he joined Eli Terry and Silas Hoadley in a business of making clocks at a wholesale rate.

Thomas continued Clarks wooden movement tall clock production, and about 1817 began making the wooden movement shelf clock. These were cased in pillar and scroll cases until 1830, when the bronze looking glass and other styles became popular. In 1842, brass movements were introduced, and first cased in the popular O. Case (which was made until 1913). Wood movements were phased out in 1845.

Perpetual calendar clocks were made from ca. Some of the most popular later types include walnut kitchen clocks, made from 18841909; marble clocks, 1887ca.

We will update this message as new information becomes available. We are sorry for the inconvenience.

Customer service is very important to me. If you have any questions at any point during the purchasing process, please dont hesitate to ask or contact me.

Feedback I Strive for 5!! Please give me a chance to resolve any issues. I I want all my customers to be satisfied when they receive their package!!

The more communication the less misunderstandings. The item "SETH THOMAS Mantel Antique Clock c/1900- Totally RESTORED" is in sale since Wednesday, January 22, 2020. This item is in the category "Collectibles\Clocks\Antique (Pre-1930)\Shelf, Mantel".