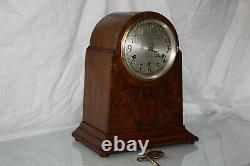 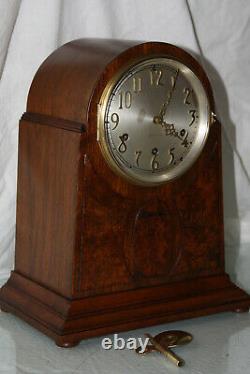 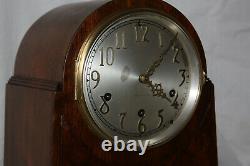 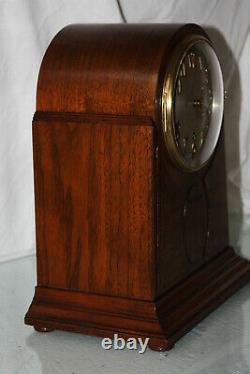 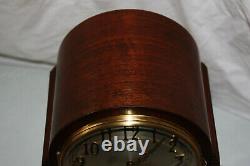 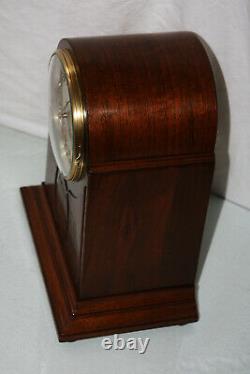 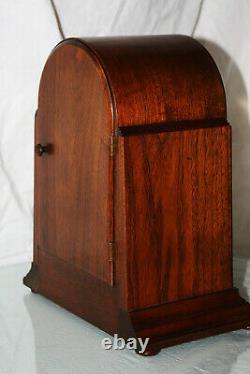 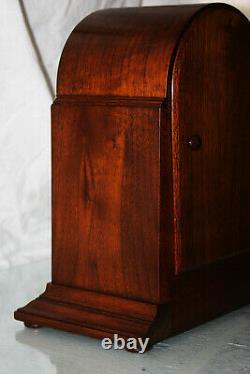 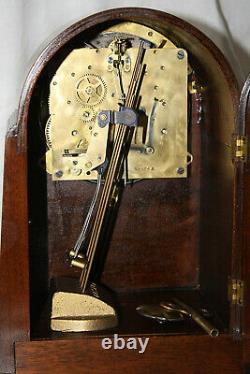 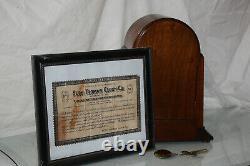 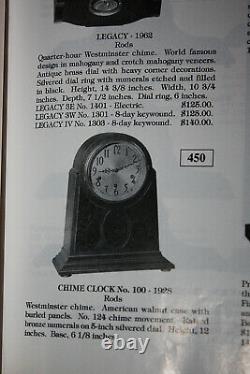 WESTMINSTER CHIME FAMILY OF SETH THOMAS CLOCKS No. 100 All American Walnut VENEER WOOD Case With Burbled Panels. Clock chimes the Hours counting them , every Quarter time, You also can see on picture how the whole clock is clean after cleaning, including the mechanism. Clock has nice Tick-Tack sound of work. I will include instruction how to set up the Clock mechanism.

Movement is marked with ST-(SETH THOMAS), Clock measures 10" from leg to leg x 6 1/4" deep x 12 1/4 height to the top. This is Huge Clock still has Original Silvered Face with Beveled Glass(see pictures) 5 1/2 in diameter with Beautiful Brass ring.

Every piece of this clock is original. All clock is very unique hardly to find for sale, usually is keep it by collectioners of Seth Thomas clocks. Price is height by You can also make an offer, Please see all clock is use zoom , this particular clock is in Excellent condition for this Age there is some damage on the veners but nothing visiblle from distance. I will include a copy of ST "Guarantee Certificate"(see picture) Absolutely for FREE This particular clock is just token of it's beauty and originality in past. People love to see something old, which comes with the style and elegance of the beginning 20th century, AMAZING.

Please feel free to contact me with any questions or to request further photos! Pendulum and key are included with the clock. The clock is running perfect!!!!!!! The clock has original surface, just some touch up was done.

Clock is original was polished and clean from dirt to original finish. For over 90 Years old,,,, PLEASE SEE ALL PICTURES FOR ALL DETAILS ---ANY QUESTION ABOUT THE CLOCK PLEASE ALWAYS be FREE TO SEND THE MESSAGE THRU E-B bay page- ----PLEASE SEE MY OTHERS CLOCKS FOR SALE!!!! If any questions just make a message and find even more great items ,,,, thanks. PLEASE DON'T ASSUME NOTHING IF NOT MENTIONED IS NOT INCLUDED IT. IF YOU GOT ANY QUESTIONS LET US KNOW.

Item Cosmetic Condition : Check pictures for reference. Seth Thomas Clock Company History Plymouth Hollow, Connecticut (After 1865) Thomaston, Connecticut Seth Thomas Seth Thomas was born in Wolcott, Connecticut in 1785, the fifth of seven children of Scottish immigrant, James Thomas, a cooper, and his wife Maria Ward. Connecticut, incidentally, was an important and expanding hub in the American clock making trade. Seth Thomas Childhood Home, 36 Peterson Ln He was born in this house and lived there until about 1810 Seth had a natural ability for carpentry and he probably obtained his knowledge and interest in mill property and manufacturing from this.

He had limited formal education and left school at an early age to become an apprentice carpenter and joiner to Daniel Tuttle, of Plymouth. Subsequently, he became a skilled woodworker and built houses and barns in the nearby towns around Farmingbury/Wolcott (incorporated 1796). In the early 1800s, Seth attempted to set up a clock-making industry in Wolcott. He made his first clock in his family's house.

They had six children Seth, Martha, Amanda, Edward, Elizabeth, and Aaron. And Aaron went into the clock business with their father, subsequently enlarging the clock factory and developing it into a worldwide business. After Thomas death in 1859, the town of Plymouth CT was renamed "Thomaston" in his honor. At that time, Aaron became President and began to add new products. Huntington and Harvey Platts of Ithaca, New York and added three models to their line that year.

The earliest of the clocks indicate only three patent dates on the dials, September 19, 1854, November 17, 1857 and January 31, 1860. The fourth and final patent of March 1, 1862 is carried on most of their calendar clocks manufactured until 1875 or 1876. On February 15, 1876 Randall T. A Thomas relative and workman in the factory, received a patent on an improved mechanism. This was put into production and utilized on all later perpetual calendar clocks until the last model was dropped in 1917.

For example, April 1897 would appear as 7981 D. On January 1, 1931, the firm became a subsidiary of General Time Instruments Corporation and soon passed from family control. In 1955, a flood badly damaged the Seth Thomas factory. They phased out movement manufacturing and began importing many movements from Germany. Hermle, in the Black forest of Germany, has made many movements for Seth Thomas clocks.

It was reported in 1988 that the firm was all but dissolved. In June 2001 General Time announced that it was closing its entire operation. The Colibri Group acquired Seth Thomas. In January, 2009, The Colibri Group unexpectedly shut its doors, laying off its 280 employees and preparing to sell all remaining jewelry, gold and silver to pay creditors. The following message appeared on the Colibri website: February 16, 2009: The Colibri Group is currently in receivership and is not accepting any orders at this time.

Feedback I Strive for 5!! Please give me a chance to resolve any issues. I I want all my customers to be satisfied when they receive their package!! The more communication the less misunderstandings. The item "SETH THOMAS Mantel Antique Chime Clock No100 c/1929 Totally RESTORED WESTMINSTER" is in sale since Sunday, June 21, 2020.

This item is in the category "Collectibles\Clocks\Antique (Pre-1930)\Shelf, Mantel". The seller is "umelai85" and is located in Chicago, Illinois. This item can be shipped to North, South, or Latin America, all countries in Europe, all countries in continental Asia, Australia, South africa, New Zealand, Egypt, Reunion.