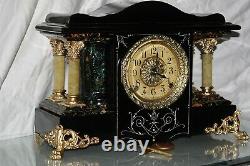 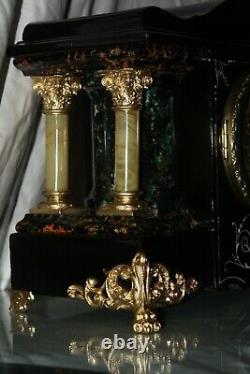 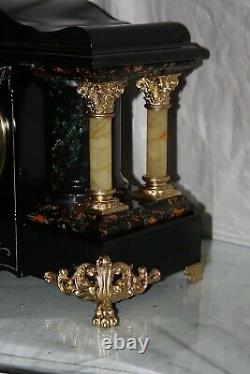 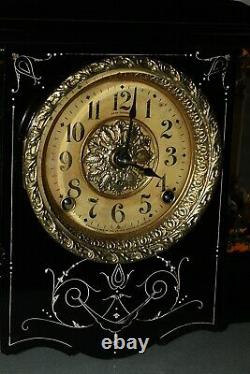 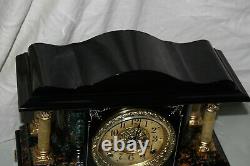 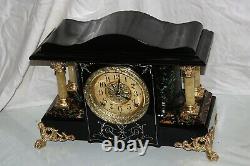 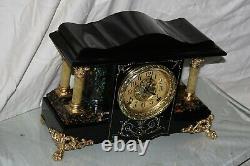 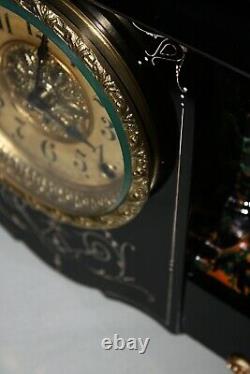 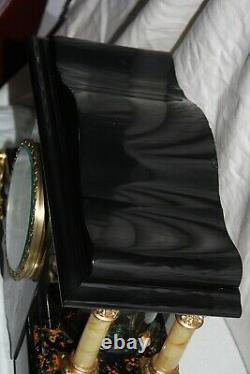 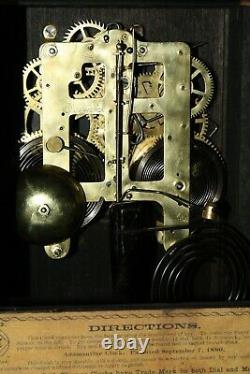 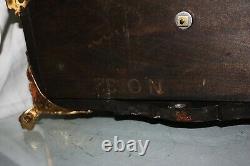 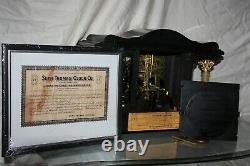 BRASS face with , original Paper 6 in diameter and Beveled Glass (see pictuyre) Every piece of this clock is original. Clock has also original metal legs and Ornaments just like was for sell in XIX century from the stores by ST.

All clock is very unique hardly to find in this Excellent shape for sale, usually is keep it by conllectioners of Seth Thomas clocks. Price is height by You can also make an offer, Please see all clock is use zoom , there is no missing adamantine , this particular clock is in Excellent condition. I will include a copy of ST "Guarantee Certificate"(see picture) This particular clock is just token of it's beauty and originality in past. People love to see something old, which comes with the style and elegance of the beginning 20th century, AMAZING. Please feel free to contact me with any questions or to request further photos!

Pendulum and key are included with the clock. The clock is running perfect!!!!!!!

The clock has original admantine surface, nothing is painted or re-coated, just some touch up was done. Clock is original was polished and clean from dirt to original finish. For over 120 Years old,,,, PLEASE SEE ALL PICTURES FOR ALL DETAILS ---ANY QUESTION ABOUT THE CLOCK PLEASE ALWAYS be FREE TO SEND THE MESSAGE THRU E-B bay page- ----PLEASE SEE MY OTHERS CLOCKS FOR SALE!!!! Connecticut, incidentally, was an important and expanding hub in the American clockmaking trade. Seth Thomas Childhood Home, 36 Peterson Ln photo above c.

1984 - link to c. 2005 photo He was born in this house and lived there until about 1810. Current Photo Current Map Seth had a natural ability for carpentry and he probably obtained his knowledge and interest in mill property and manufacturing from this.

He had imited formal education and left school at an early age to become an apprentice carpenter and joiner to Daniel Tuttle, of Plymouth. Subsequently, he became a skilled woodworker and built houses and barns in the nearby towns around Farmingbury/Wolcott (incorporated 1796). In the early 1800s, Seth attempted to set up a clock-making industry in Wolcott. He made his first clock in his family's house.

Thomas continued Clarks wooden movement tall clock production, and about 1817 began making the wooden movement shelf clock. These were cased in pillar and scroll cases until 1830, when the bronze looking glass and other styles became popular. In 1842, brass movements were introduced, and first cased in the popular O.

Case (which was made until 1913). Wood movements were phased out in 1845. Seth's first wife was Philinda Tuttle; they married in the early 1800s and had a daughter, Philinda. His second wife was Laura A. They had six children Seth, Martha, Amanda, Edward, Elizabeth, and Aaron. And Aaron went into the clock business with their father, subsequently enlarging the clock factory and developing it into a worldwide business. After Thomas death in 1859, the town of Plymouth CT was renamed "Thomaston" in his honor. At that time, Aaron became President and began to add new products.

1895; black (Adamantine finish) wood mantel clocks, ca. 18851917; black enameled iron cased clocks, 1892ca. 1895; oak kitchen clocks, 1890ca. 1915; tambour clocks, introduced in 1904; chime clocks, introduced in 1909; and electric A/C clocks, introduced in 1928. The Seth Thomas Clock Company was very prosperous into the 20th Century and was considered the Tiffanys of Connecticut clock manufacture, even by their competitors. Between 1865 and 1879 they operated a subsidiary firm known as Seth Thomas' Sons & Company that manufactured a higher-grade 15-day mantel clock movement and during that period were major supporters of a New York sales outlet known as the American Clock Company. Many Seth Thomas clocks from 1881 to 1918 have a date code stamped in ink on the case back or bottom. Usually, the year is done in reverse, followed by a letter AL representing the month. For example, April 1897 would appear as 7981 D. On January 1, 1931, the firm became a subsidiary of General Time Instruments Corporation and soon passed from family control. In 1955, a flood badly damaged the Seth Thomas factory. They phased out movement manufacturing and began importing many movements from Germany.

Hermle, in the Black forest of Germany, has made many movements for Seth Thomas clocks. It was reported in 1988 that the firm was all but dissolved.

In June 2001 General Time announced that it was closing its entire operation. The Colibri Group acquired Seth Thomas. In January, 2009, The Colibri Group unexpectedly shut its doors, laying off its 280 employees and preparing to sell all remaining jewelry, gold and silver to pay creditors. The following message appeared on the Colibri website: February 16, 2009: The Colibri Group is currently in receivership and is not accepting any orders at this time. We will update this message as new information becomes available.

If your label is still intact, the printers name and address can be found in small print at the bottom of the label. PLEASE VISIT MY OTHER AUCTIONS. Please note that most of my items are antique/ vintage items and show normal signs of wear and use, such as small nicks and dings, etc. Please check the pictures as they say much more than words. I dont usually list every little nick or ding; the pictures show a much better description. Please do a level to the clock to keeping and running well. Customer service is very important to me. If you have any questions at any point during the purchasing process, please dont hesitate to ask or contact me. Feedback I Strive for 5!! Please give me a chance to resolve any issues. I I want all my customers to be satisfied when they receive their package!! The more communication the less misunderstandings. The item "SETH THOMAS Mantel Antique Clock c/1906- FULLY RESTORED -Model No 32" is in sale since Monday, September 28, 2020. This item is in the category "Collectibles\Clocks\Antique (Pre-1930)\Shelf, Mantel". The seller is "umelai85" and is located in Chicago, Illinois. This item can be shipped to United States, Canada, United Kingdom, Denmark, Romania, Slovakia, Bulgaria, Czech republic, Finland, Hungary, Latvia, Lithuania, Malta, Estonia, Australia, Greece, Portugal, Cyprus, Slovenia, Japan, China, Sweden, South Korea, Indonesia, Taiwan, South africa, Thailand, Belgium, France, Hong Kong, Ireland, Netherlands, Poland, Spain, Italy, Germany, Austria, Bahamas, Israel, Mexico, New Zealand, Singapore, Switzerland, Norway, Saudi arabia, United arab emirates, Qatar, Kuwait, Bahrain, Croatia, Malaysia, Chile, Colombia, Costa rica, Panama, Trinidad and tobago, Guatemala, Honduras, Jamaica, Barbados, Bangladesh, Bermuda, Brunei darussalam, Bolivia, Egypt, French guiana, Guernsey, Gibraltar, Guadeloupe, Iceland, Jersey, Jordan, Cambodia, Liechtenstein, Sri lanka, Luxembourg, Monaco, Macao, Martinique, Maldives, Nicaragua, Oman, Pakistan, Paraguay, Reunion, Uruguay.